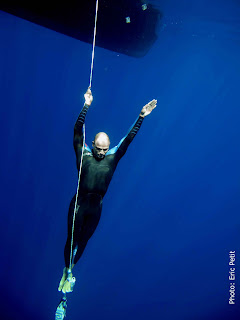 First announced through the documentary "Waving At My Ancestors" (Peter De Mulder) than foreseen on September 2010, the project has been postponed but the quest remains anchored deep in my heart.

Origin of the Traditional Quest: I discovered Egypt and his traditions through Mr. Alaa El Din, in 2002. In 2004, preparing "The Ultimate Dive", my trips to Egypt became frequent. During one of these trips, Alaa asked a holly man to bless me (we all knew the risks my project involved). The gesture touched me, and I can still hear the litany of the words.

'Al Hamdulillah!' 'Allah!', words pronounced by Alaa and his sailors accompanied each of my dives while I was diving deeper and deeper in the unknown.

In November 2007, 2 years after 'The Ultimate Dive' I started diving again. And during the filming of a commercial in Indonesia, felt the solemn call of the sea and the urge to communicate with the silent of depths again. Two months later I returned to see Mr. Alaa El Din, in Egypt who brought me back to the dive site, which has become sacred to me: Abu Ramada.

Without my sled, I tied a weight belt to a rope, got rid of mask and fins, and dropped to 40m holding the weights with my hand.

Back on the boat, Alaa explained me the culture of the pearl divers of the Middle East who used to hold the weight with their bare feet. Within no time I was back into the water to try and ended up practicing on 30, 70 and finally 100metres.

Emotions are complex to explain. If in modern No Limit, the stretched rope shows me the way, it felt here like getting deeper into virgin territories. No sound of sled gliding along the rope. A single contact: a rope, like an umbilical cord. The project « Renewing with Traditions" was born.

I read up about pearl divers. Discovered the traditions, found out about the songs on board, heard the drums on ancient videos. With African roots, I was conquered.

More research made me realize that unlike what I had done during my 100m experience, where I pulled myself back to the surface, ancient pearl divers of the Persian Gulf, were hauled back to the surface by the crew. I returned to Egypt to try.

The magic was there. In the communion of the diver with the team ; in the blind faith and the spiritual bond that eventually united us ; in the synchronization of efforts. Unlike modern No Limit, the ascent is here also an initiation, rich in information. I could feel the energy of my team on each pull. The team literally held my life in their hands. The Traditional No Limit record is born out of these emotions... See you down there, soon!

Posted by Patrick Musimu at 2:00 PM

Patrick Musimu
lives his passion as a 'free electron' outside diving federations. Challenging rigid concepts and dogmas he broke human mental barriers and became in 2005 the first man to dive to 200 metres. Through the years, attempts to surpass his 209m dive without external breathing artifact failed leading sport institutions to reset their rules. Pioneer, author, corporate speaker and coach, Patrick pursues his path of Self discovery inseparable of a reflexion on the human being.